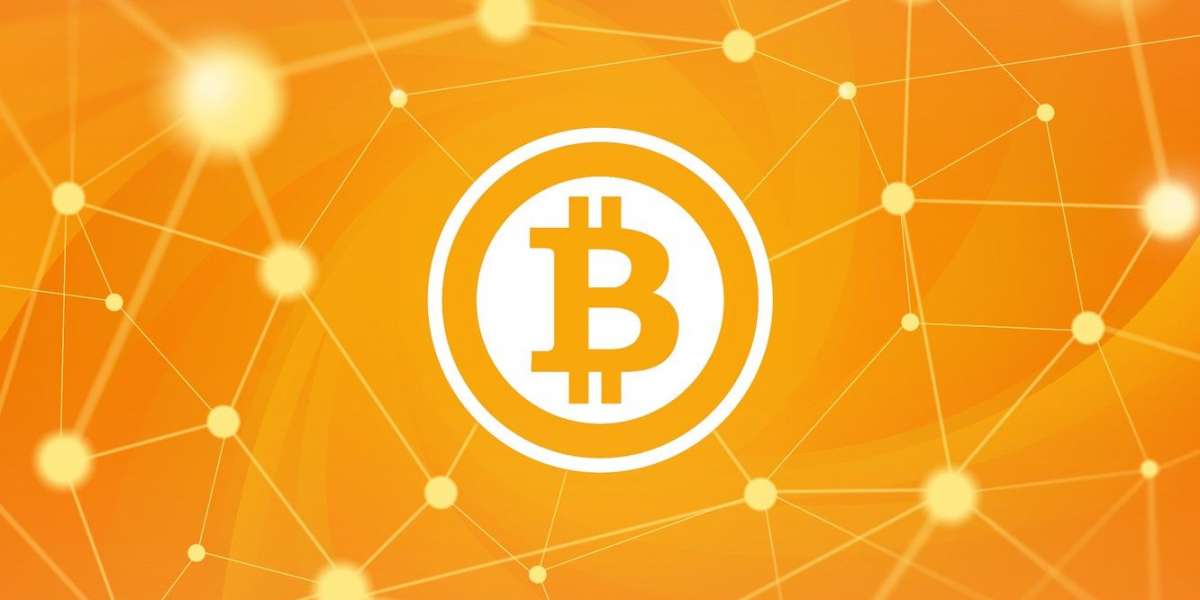 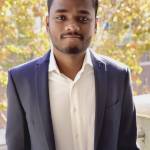 ‘‘Cryptocurrency trading was one of the most exciting jobs of 2017’’. High return on investment has attracted many people towards this crypto market. Let's see if we are able to improve Bitcoin price prediction using Twitter sentiment

In 2017, the cryptocurrencies market value rose from 19 Billion USD to 741 Billion USD. Bitcoin had a 59.87 % market cap where Bitcoin price increased 2000 %  An exponential increase in market price had attracted everyone to invest and make money

Cryptocurrencies are bought and traded on platforms similarity to stock market. These markets are not yet regulated by any country.Anyone can buy and sell them across the world at any time. Government announcements, regulations, alliances, and promotions from famous personalities play a key role in deciding the price of cryptocurrencies. If a statement is made in the USA, the news propagates
to other countries like India, China via the internet, Social media websites, etc.

We would like to answer the following in this article

We approach the above problem statement in the following way:

As we are using twitter feed for aggregating Bitcoin opinion for a day, the tweets are posted throughout the day, which needs to be collected and processed each day. Using Twitter API, we first extract Bitcoin-related tweets from the API using ‘‘#BTC’’, ‘‘#BITCOIN’’ hashtags, with the English language as the filter.

Once the tweets are collected, they are pre-processed using pre-processing techniques, which will pass through a classification algorithm for classifying. If the individual tweet is positive 1 or negative 0, as shown in Figure.

Once all the tweets are classified, we need to aggregate that day’s overall sentiment, i.e., if it was a positive day for Bitcoin stating people were supporting bitcoin or negative day stating
people were not supported on that day. We use the Prophet model to capture daily, weekly trends, and perform well for daily predictions; hence we choose this model to set up a base model to predict the bitcoin price. We are using
the sliding window technique, as shown in Figure.

We keep retraining the model again so that the model predicts better based on changing trends. We use the R2 score on this test set as our evaluation metric. Once the base model is running, the aim to see if we can improve the R2 score of the test set by adding a daily sentiment and additional features.

The final proposed model is as shown in the Figure, where the left side of the figure is the workflow of the predictive model which gives next day predicted price, the center workflow is the sentimental analysis workflow which gives current day sentiment

The SVM model has three inputs - next day price prediction from the predictive model, current-day aggregated twitter sentiment and additional features. These inputs, when passing through the SVM model, give us the adjusted bitcoin price, which is expected to be better than our predictive analysis base model.

We use different datasets for different tasks in the project

We download the dataset from Kaggle , which is prepared by Stanford University. It consists of 1.6 million tweets equally distributed into positive and negative tweets. Each tweet consists of six fields- sentiment of the tweet, tweet ID, tweet date, query, userID, and text. Out of these six features, we use only sentiment and text for our experiments.

Using the data preparation technique, we drop all other features and keep only text and sentiment. Sentiment feature has two binary values 0 for negative, and 1 for positive, the text feature has tweet written by the user.

Usually, we can extract bitcoin tweets from twitter by using Twitter API, but the timeline for analysis is from 10-01-2017 to 03-01-2018. Twitter has restrictions over mining historical tweets. Hence, we use ‘‘Get Old Tweets Programmatically’’ an API to get old tweets.

We use 3 AWS EC2 instances to extract tweets of different months parallelly from 10-01-2017 to 03-01-2018, collecting 5000 tweets every day by running automated scripts that call the API every 5 minutes and downloads the tweets. We initially store the tweets on the local EC2 file system, then we use scpcalls and download them to our local desktop and merge all the files.

A total of 467361 are collected; we preprocess these tweets by removing tags, URL. Each tweet consists of twitter handle, timestamp, tweet. Using the handle, if duplicates are present, we remove them. We keep the date and cleaned tweets for our experiments. 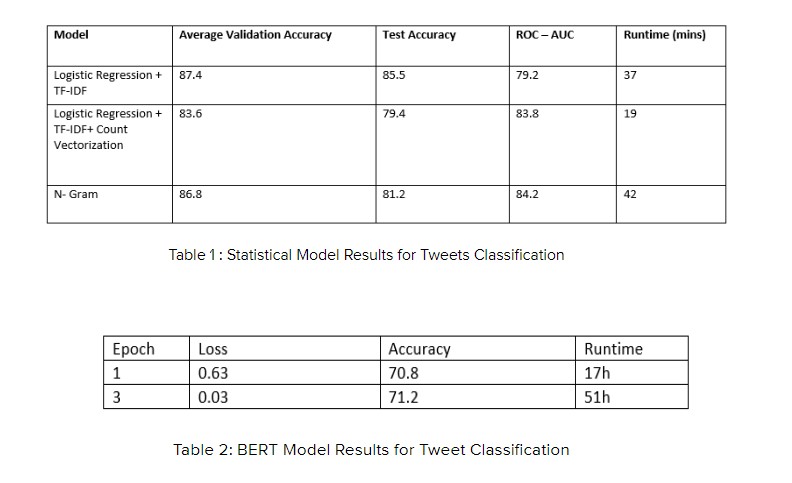 We see that although being a statistical machine learning model, Logistic Regression with TF-IDF gave the best test accuracy of 85.5 percent with a runtime of 37 mins for classifying the tweets.

In comparison, BERT, which is one of the best classification algorithms, takes significantly long training time (51 hrs) and provides an accuracy of just 71 percent. The Machine used to train BERT was substantially more powerful in terms of CPU computation and memory than the one used for Figure 31 experiments. 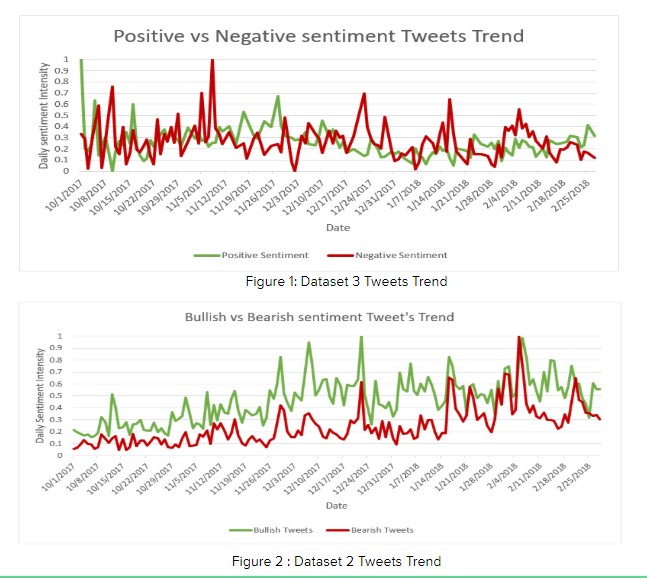 When we are comparing these two charts, in Figure 1, we don’t observe any significant spikes or changes between two consecutive days, whereas there are many spikes and changes in Figure 2. Hence, Figure 2 reflects better emotions of twitter user’s sentiment during this period. 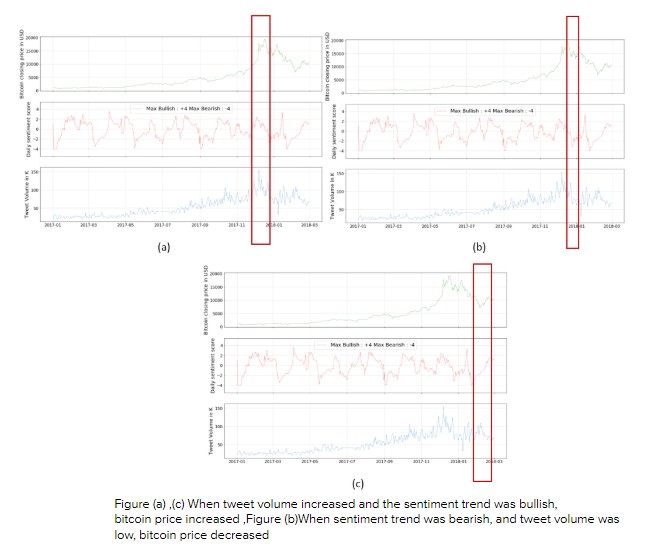 We first set up a base model using dataset 2 closing price.We use the closing price of the previous day to predict the price of the next day. We test different N values varying from almost one year to one week to understand its impact on the R2 score. 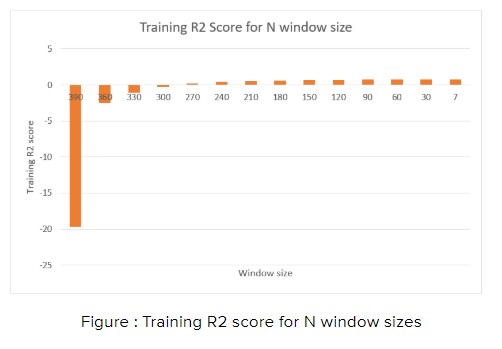 We see the training and test results of our baseline model in above Figures. The red line is the actual price, and the blue line is our model’s predicted price, as we can see in Figure for the first 150 predictions, our model predicts well since there are no exponential spikes. Later, when there were exponential rises,our model was able to catch the changing trend, but it failed when there was an
exponential fall.

We can see in Figure, that our model performs poorly on the Test set, it achieved an R2 score of -19.93. This score becomes our base model score that we try to improve by adding the sentiment, and additional features from dataset 2. 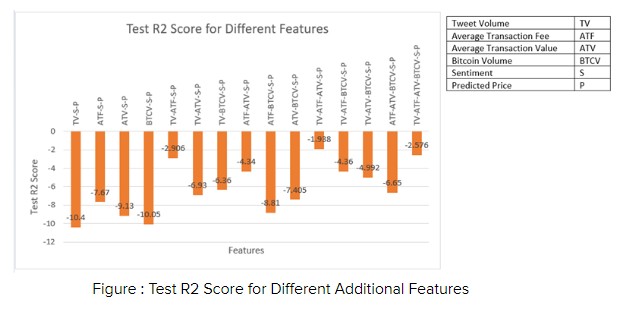 We follow the recursive additive approach,where we first choose a combination of features, then using these features we train the SVM model and predict for test data. Using gridsearchCV, we tune the SVM
hyperparameters to optimize and get the best R2 score.We try RBF and sigmoid SVM kernels, try different values of C, gamma, and epsilon values to find the optimal values.

Sentiment and predicted prices are fixed features for all models; we keep adding additional features to them. As we see in Figure,

From Figure, adding the sentiment and additional features improved our R2 score. The R2 score is approximately 90 percent lesser than our base model R2 score. It reduced from -19.8 is -1.938. 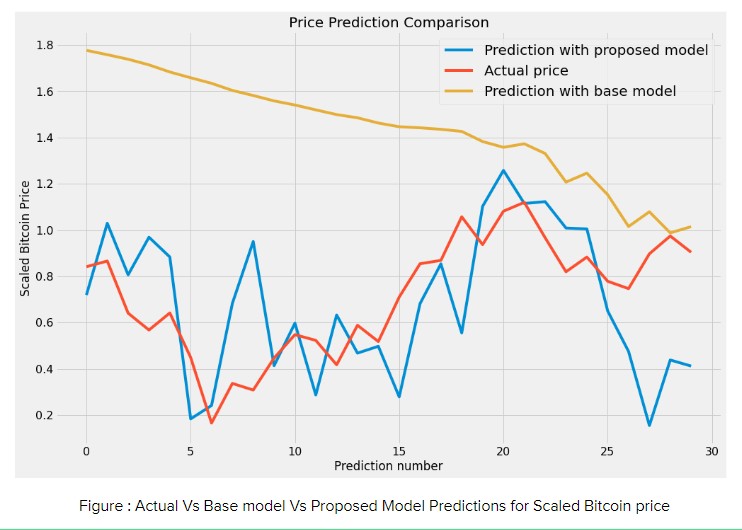 We wanted to do the following tasks: 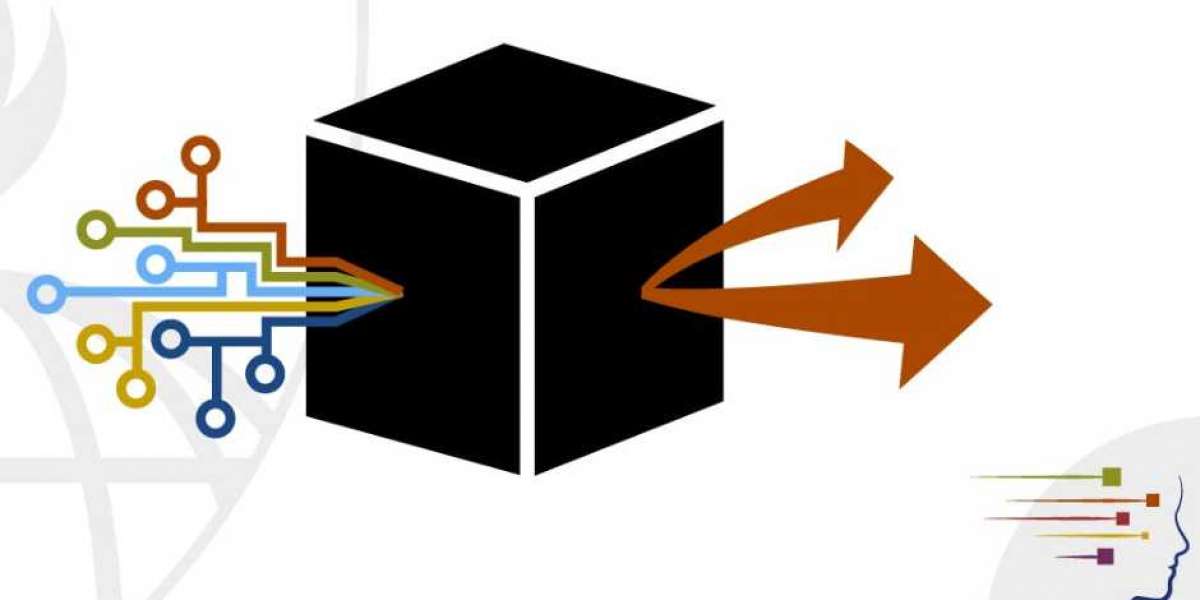 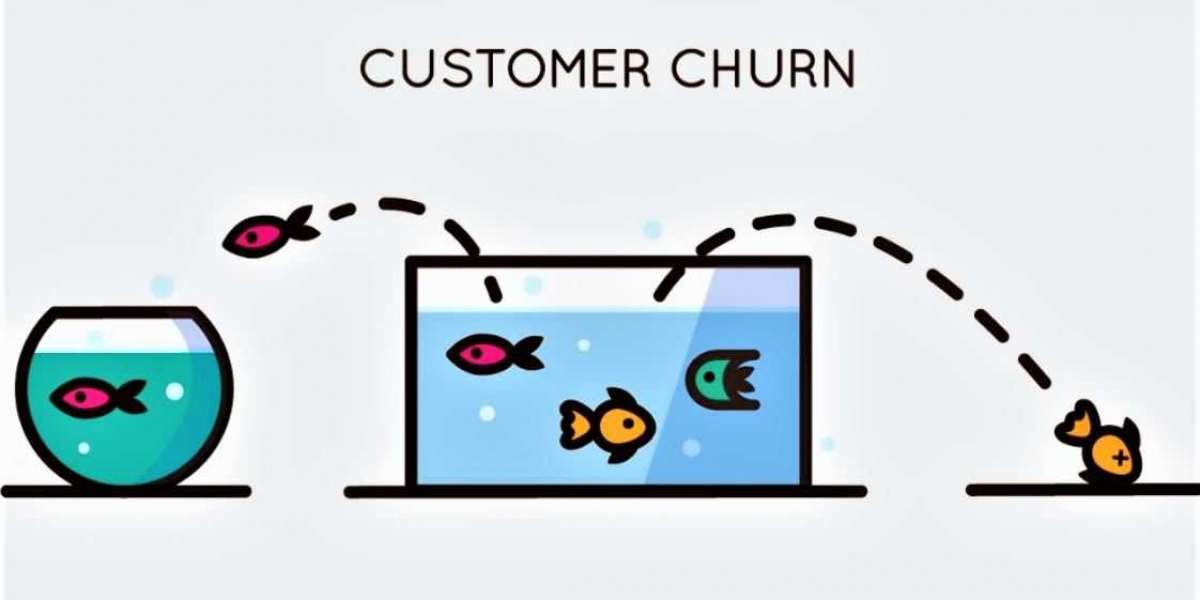 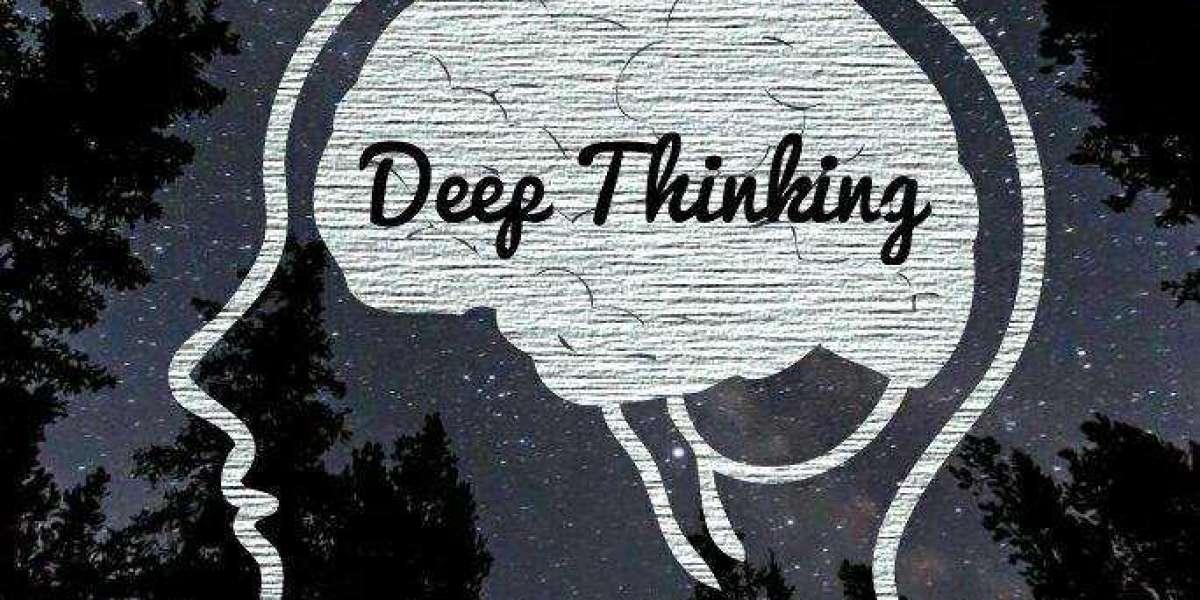 Lifestyle of the 21st Century. A deeper understanding of the concerns and changes needed.