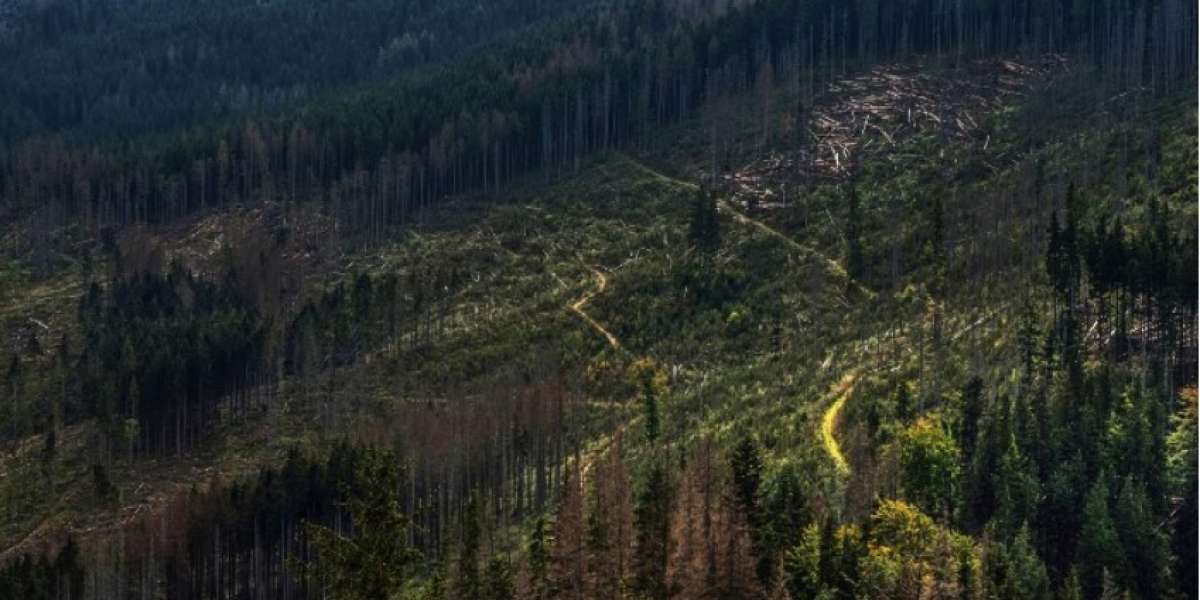 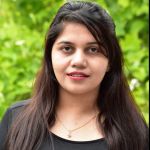 The aim of this analysis is to analyse the extent of global deforestation from year 1990 to 2016.
For this data analysis SQL, Python and Tableau have been used to find areas of concern as well as areas that present an opportunity to learn from successes.

Over the last few decades, there have been many factors which has caused adverse climatic changes, one of them is deforestation, which has been a case of concern. There have been efforts from organizations and governments to tackle this problem, but this seems like an incessant harm which in addition to climate change causes flooding, increased greenhouse gases in the atmosphere, desertification.

The data is obtained from the World Bank, it includes forest area and total land area by country from 1990 to 2016, as well as a table of countries and the regions to which they belong.

Importing data and snippet of the data output. 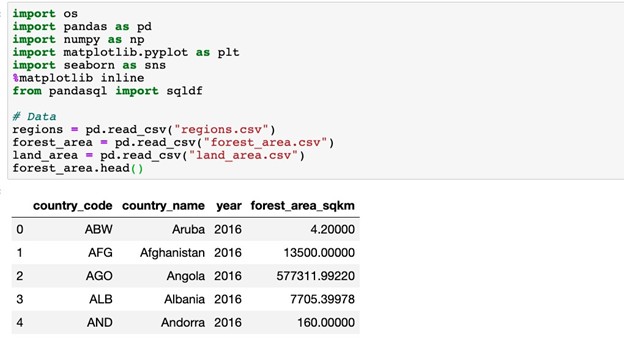 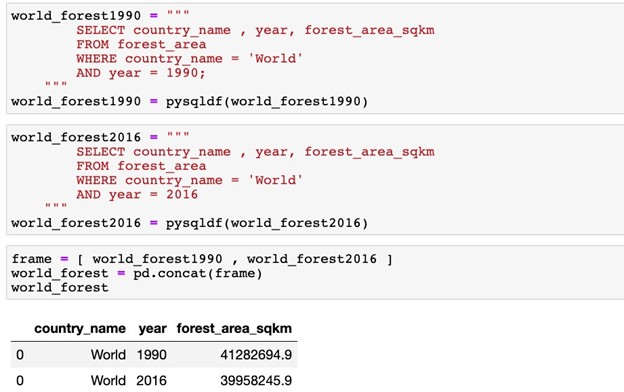 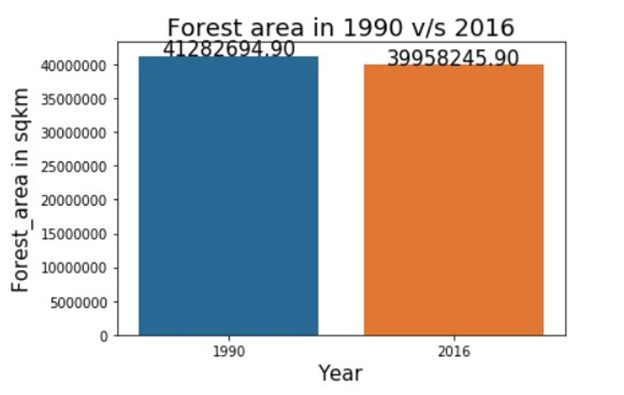 Query to find out which country’s total area is closest to the entire amount of forest area lost between 1990 and 2016.

In year 2016, 31.38% was forest cover out of total land area of the world. Latin America and Caribbean is the region which has the highest of its land area covered in forest, 46.16% of its land area is all forests. On the other hand, Middle East and North Africa has only 2.07% of their land forested. 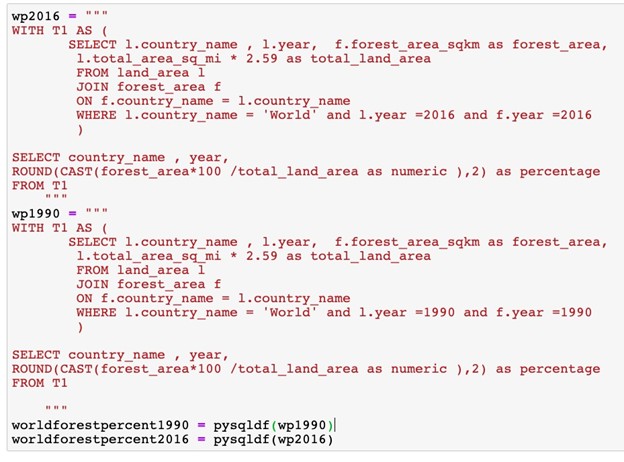 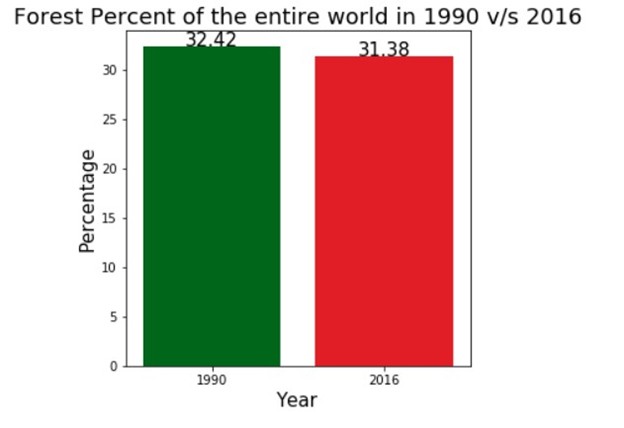 Next, let's find the region level of forest per cent. For that first combine all three tables together: forest_area, land_area and regions. And create two additional columns:

Query to find the forest percent change of a region: 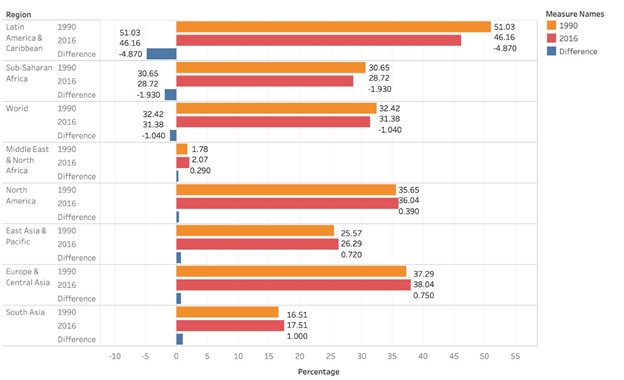 From the visualization above, the two regions that saw the decrease In their forest area are Sub-Saharan Africa (from 30.67 % to 28.79%) and Latin America and Caribbean (51.03% to 46.16 %). Other regions as shown managed to increase their forested area cover. The combined decreased percent of the regions was enough to overshadow the other region increase and overall world forest area decreased from 32.42% to 31.38%.

Forest percentage of African countries in 2016. This graph has been created in Tableau. 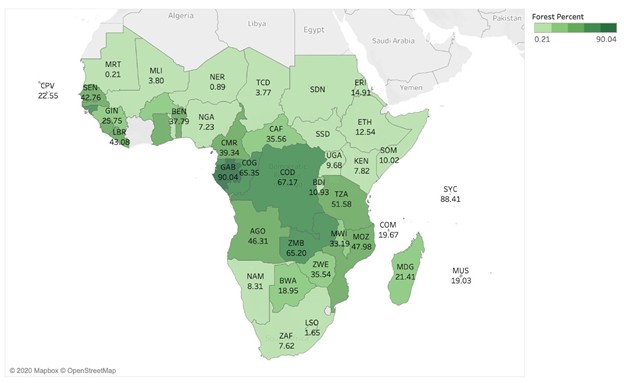 Let's look at countries which topped in increasing their forest covers.

China increased it forest cover by 527,229 sq. km. over the span of 26 years. Next in line is United States, which increased its forest cover only by 79,200 sq. km. Far less than what China had achieved. It will be interesting to study how China drove their forest cover by half a million sq. km couple of decades. 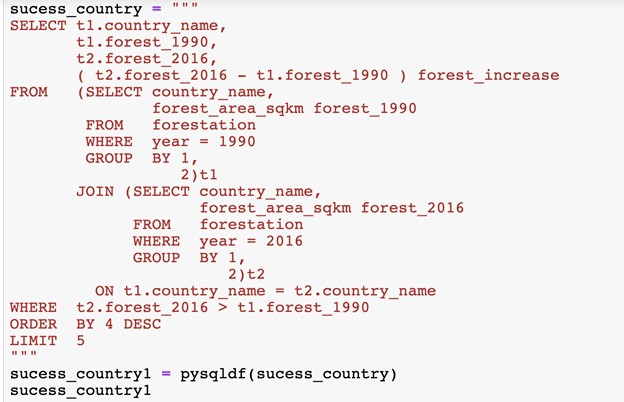 Output of the above query gives top 5 countries which had the highest forest increase numbers.

From the table above, Vietnam should be lauded for making in the top 5 taking in consideration the other countries in this list. Vietnam's forest area increased by 55,390 sq. km over 26 years. 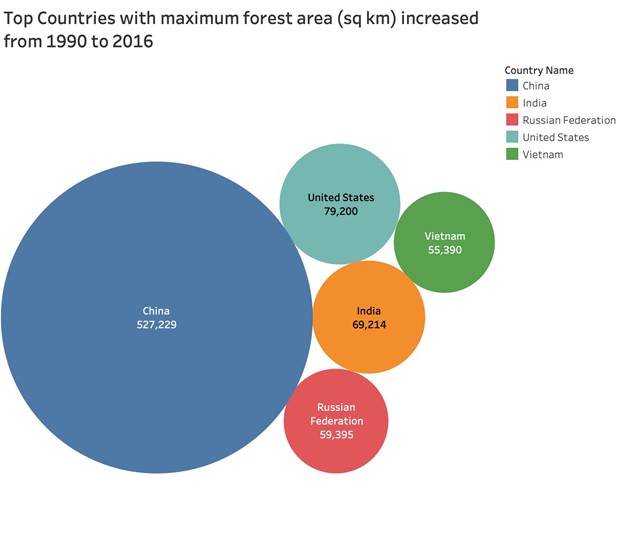 Let's look at countries which experienced the maximum deforestation. There are two ways to analyze this: 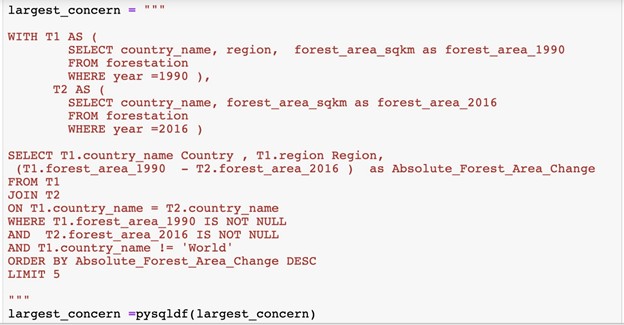 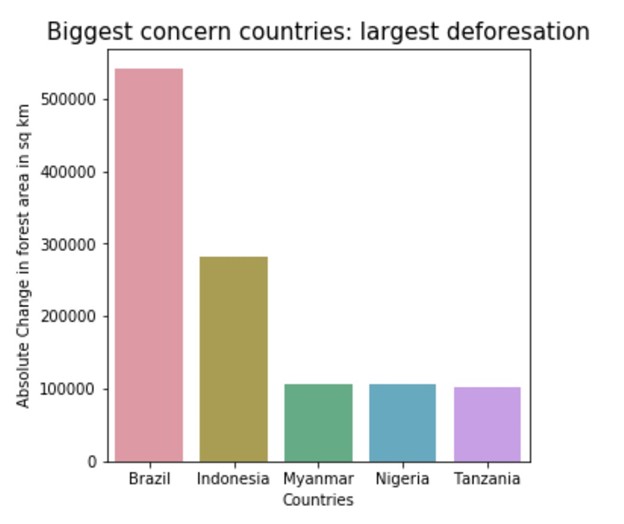 From the percent decrease analysis, we see that Togo, Nigeria, Uganda and Mauritania are the 4 countries which are from Sub-Sahara Africa region. While Honduras is from Latin America Caribbean region. 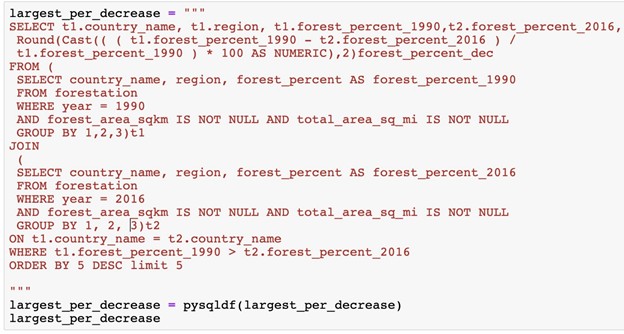 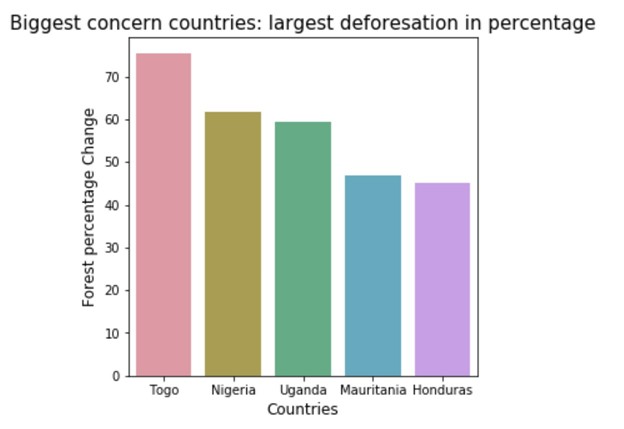 From the percent decrease analysis, we see that Togo, Nigeria, Uganda and Mauritania are the 4 countries which are from Sub-Saharan Africa region. While Honduras is from Latin America Caribbean region.

From the two above ways to analyze countries with largest deforestation, Nigeria is the only country which appears on the list of decrease in forest area in sq. km and percent decrease. Strict actions can be taken by Nigeria to tackle this global issue of deforestation.

Generating quartile table using SQL query. Most countries are within the 0-25% quartiles. The countries are categorized into four quartiles and from this we are extracting the countries which have forestation percentage greater than 75%. 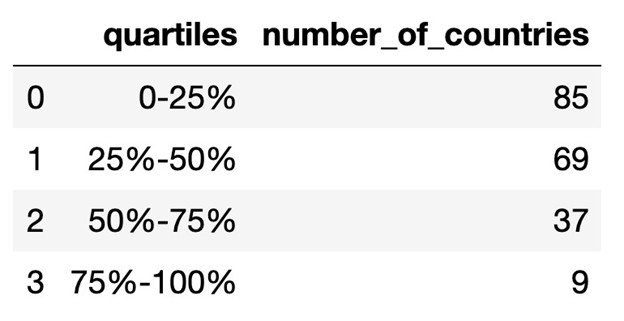 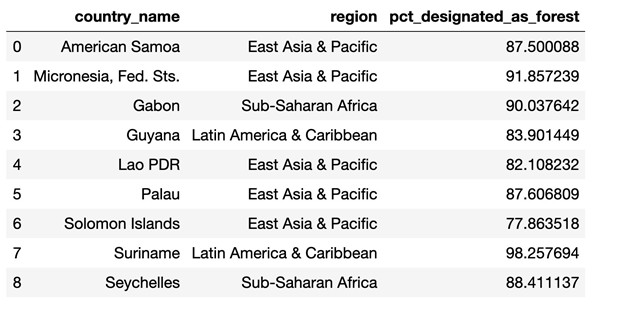 China and United states are the two countries that tops the table as their forest area increased from 1990 to 2016. Whereas Sub-Saharan Africa Region is becoming the next biggest concern as top 4 countries whose forest percent area decreased the most belongs to this region.

Brazil is one of the country with highest absolute forest area change from 1990 to 2016, this country has its own reasons for this change, to name few, forest fires, increasing mining activities, etc. making it account for the a third of worlds primary forest loss. 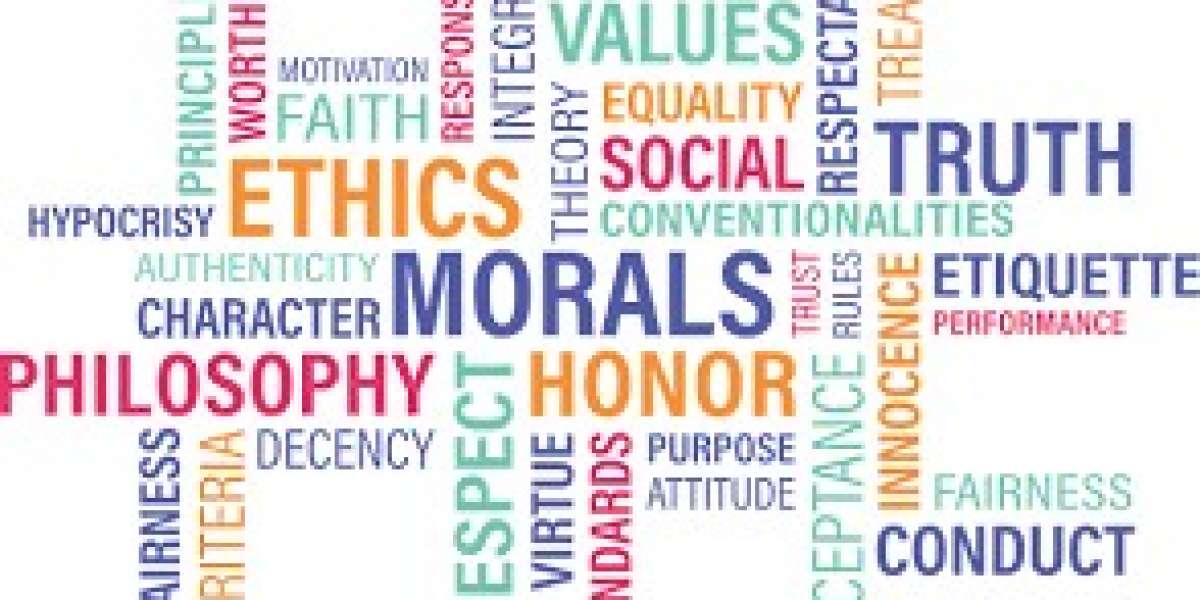 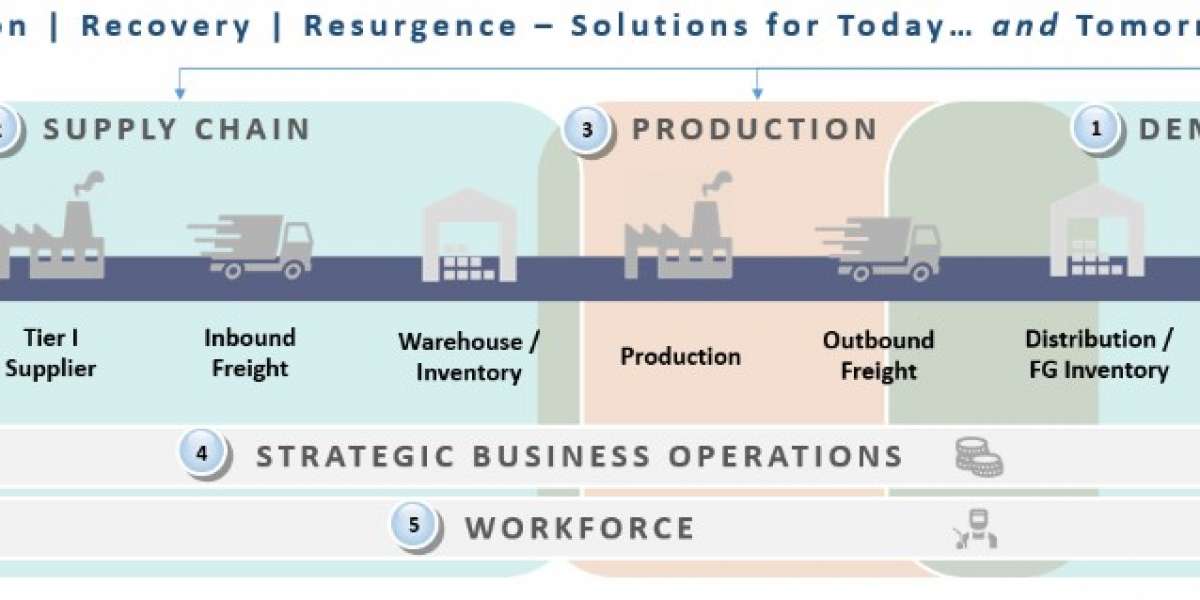